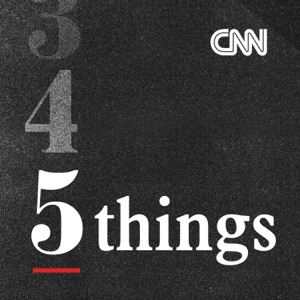 We bring you 5 stories that will get you up to speed and on with your day. Updates at 6am, 9am, 12pm, 5pm and 10pm Eastern, every weekday.

Today President Joe Biden signed a bill to avoid a costly rail strike — we’ll explain the details. Ukrainian embassies across Europe have been getting bloody packages in the mail with animal parts. A new CNN poll shows where Georgia voters stand ahead of the runoff election next week. A serial killer in Canada is in custody. Plus, scientists are one step closer to an HIV vaccine.

The latest job numbers are out - we'll tell you what they mean for the economy. A CNN poll shows Democrat Raphael Warnock has a slight edge going into Tuesday's Senate runoff election in Georgia. A Ukrainian official says at least 10,000 of its soldiers have died in the war with Russia. Nine goals, controversial referee decisions and a four time winner going home - just another night at the FIFA World Cup. Plus, Twitter has suspended Ye.

We start by looking at former President Trump’s recent legal setbacks, as two courts rule against him. China has signaled it’s going to start easing some Covid-19 restrictions, but is still going after protesters. South Africa’s president is facing calls to resign - we’ll tell you why. President Joe Biden wants to change the Democrats’ primary map. Plus, how teenagers’ brains changed during the pandemic.

A federal appeals court has ended a special master’s review of documents seized from former President Donald Trump’s Mar-a-Lago estate. The US Supreme Court says the Biden administration’s student loan cancellation plan remains blocked for now but agreed to take up the case next year. The Senate has passed a bill that would avoid a national freight rail strike and shutdown but without paid sick leave. The US approved a $380 million-dollar missile sale to Finland as it seeks to join NATO. Lastly, we’ll tell you which parts of the US are bracing for a winter storm.

President Joe Biden and French President Emmanuel Macron pledged to hold Russia accountable for its war in Ukraine. Spain says it’s ramping up security following a series of letter bombs. The average price for gas is cheaper than before Russia invaded Ukraine.  The Senate is set to vote on a bill that would avoid a national freight rail strike and shutdown. And the Biden administration announced news efforts to end the HIV/AIDS epidemic by 2030.

New federal data out shows inflation is heading in the right direction, amid economic uncertainty. Another setback for President Joe Biden's student debt relief plan. The founder of the now bankrupt cryptocurrency exchange FTX says he made a lot of mistakes. One woman makes history at the FIFA World Cup in Qatar. And, a four day week might sound great to you - now a new global study says it could also be good for business.