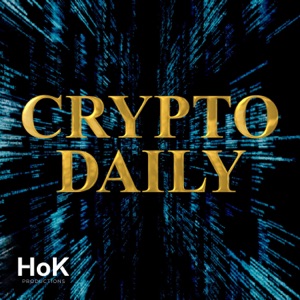 Will PayPal allow you to send Crypto? What is in the new Crypto Bill? Is the Fortnite token a scam? What will the first NFT game on the Epic Games store be? How is AMC celebrating the new Jurassic Park film? All this on today's episode of Crypto Daily.

Why PayPal Will Finally Let You Send Crypto To External Wallets

AMC Launching 'Jurassic Park'/'Jurassic World' Double Feature: How You Can Get A Free NFT

--- Send in a voice message: https://anchor.fm/cryptodailyshow/message

my name is Destiny Cast and be sure to follow our show wherever you listen to podcasts and please leave a review on apple podcasts.

in the Paypal system, it's stuck. But that's all

about to change. According to report from TechCrunch, the general manager of Blockchain,

feature was the most demanded from our users

since we began offering the purchase of crypto on our platform. If you want to transfer

crypto from a Paypal

to another Paypal account, it's going to remain free. But if you want to

transfer out of Paypal, you will have to pay the network fees Fernandez also

We are enabling connectivity to other

and applications. Now this move shows that we're in this for the long term. I think it's important

to invest in the space. Now, hopefully it will only encourage more people to adopt crypto. Yesterday I told you about the unveiling of the first potential federal crypto bill here in the U. S. The bipartisan bill

received a mixture of emotions much like any proposed bill, but overall it had support

from the crypto community. The bill proposes that the crypto industry be split and regulated by two entities. The Securities and

Exchange Commission would regulate any digital

Anything considered a commodity would be overseen by the commodities futures trading commission. Now the bill does contain language that will

serve as a guiding evaluator for classifying the digital

People against the bill are worried about such a large industry being supervised by the CftC, which is arguably the smallest

be subject to a capital gains tax, which would make using Crypto as an actual currency even more

enticing for people. There's also more consumer protection which would allow users to keep their assets in the event that a company goes under. Well, I wanted to take a moment to issue a

the Ceo of epic games, tim Sweeney has come out saying that it is not affiliated with a battle Royale game. Now, there was an exchange between Sweeney and the Fortnite token creator where Sweeney had to explain how trademarks and copyrights

work please, if you are planning to invest in this token,

don't not only is it trying to leverage I. P. That they don't even own, but clearly whoever is running the business behind, it doesn't understand

Also, Epic Games said that their lawyers are on it and I imagine that

the project is gonna be shut down pretty quick. Now it's time to turn our focus over to the world of N. F. T. S. And I figured that I would continue the Epic

been announced that the first N. F. T game

on the Epic store will be called Grit. This game is a Battle Royale game, although its

announcement was not well received from the gaming community at the moment, the only gameplay footage shown was a character spinning around a room. We didn't see any actual fighting or mechanics of the

game, which has left a lot of people angry and skeptical about the projects. I for one am very

excited for this. I enjoy Western games like Red Dead now there's no launch date

yet, but I'll be playing day one to see how it is. One of my all

In fact, I was just at monster palooza here in L. A. And got to chat with matt

Winston, who is one of the people operating almost every single dinosaur in the movie. His father is also stan Winston

park Dominion is coming out with the original cast members joining the film To celebrate Thursday June nine. AMC is doing a Jurassic park double feature showing the original film from 1993 followed by Dominion. Anyone who purchases a ticket to this special event will receive a free

in partnership with Viv when you purchase your ticket, you'll be sent a

code and have until july

16th to redeem it for the NFT. To be honest, I'm willing to buy a ticket just to get that. N f

also leave a review on Apple podcasts or comment on

I'm Dustin Krause and thank you for joining me today.