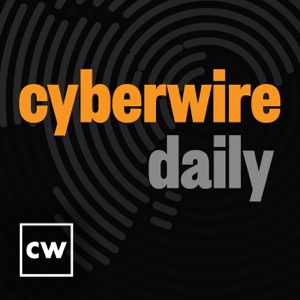 The daily cybersecurity news and analysis industry leaders depend on. Published each weekday, the program also includes interviews with a wide spectrum of experts from industry, academia, and research organizations all over the world.

CyberWire Daily Cyberespionage, cybercrime, and patriotic hacktivism. The Heliconia framework described. Cyber risk for the telecom and healthcare sectors. Notes on the hybrid war. Predictions for 2023. Cyberespionage, cybercrime, and patrioti...
A new backdoor, courtesy of the DPRK. The Medibank breach is all over but the shouting (or, all over but the suing and the arresting). Risks and opportunities in telecom’s shift to cloud. Cyber risk in healthcare. An assessment of Russian cyber warfare. Robert M. Lee from Dragos assesses the growing value of the ICS security market. Our guest is Cecilia Seiden of TransUnion to discuss their 2022 Consumer Holiday Shopping Report. And it’s December, which means…predictions. For links to all of today's stories check out our CyberWire daily news briefing: https://thecyberwire.com/newsletters/daily-briefing/11/229 Selected reading. Who’s swimming in South Korean waters? Meet ScarCruft’s Dolphin (ESET) Medibank hackers announce ‘case closed’ and dump huge data file on dark web (the Guardian)  New details on commercial spyware vendor Variston (Google) Risks and opportunities in telecom’s shift to cloud. (CyberWire) Moody’s discusses cyber risk in healthcare. (CyberWire) 'Do something:' Ukraine works to heal soldiers' mental scars (AP NEWS) Reformed Russian Cybercriminal Warns That Hatred Spreads Hacktivism (Wall Street Journal) Cybersecurity predictions for 2023. (CyberWire)

CyberWire Daily Laura Whitt-Winyard: Securing the world. [CISO] [Career Notes] Laura Whitt-Winyard: Securing the world....
Laura Whitt-Winyard, CISO from Malwarebytes, sits down to share her story, beginning with a desire to be a pediatric oncologist that she later discovered was not the path for her. Laura was bouncing around from job to job until she bought her first computer, and a light bulb went off in her head. She set out to make it her goal to learn about this new, interesting field and grow within it. Now as a successful CISO, she wants to make the world more secure and goes from company to company to complete her goal. She considers herself a servant leader whose goal is the greater good. She compares her role to football, explaining that she is not the quarterback, but the center for the team. She believes she is the center that paves the path for the quarterbacks on her team to reduce the noise, to give the quarterback all the tools that they need to do their jobs and do their jobs well. We thank Laura for sharing her story.

CyberWire Daily Encore: The secrets behind Docker. Encore: The secrets behind Docker.
Alon Zahavi from CyberArk, joins Dave Bittner on this episode to discuss CyberArk's work in conjunction with Patch Tuesday. CyberArk published about how Docker inadvertently created a new vulnerability and what happens when it's exploited. CyberArk's research concluded that an attacker may execute files with capabilities or setuid files in order to escalate its privileges up to root level. CyberArk found the new vuln in some of Microsoft’s Docker images, caused by misuse of Linux capabilities, a powerful additional layer of security that gives admins the ability to assign capabilities and privileges to processes and files in the Linux system The research can be found here: How Docker Made Me More Capable and the Host Less Secure