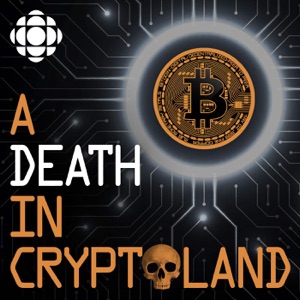 A Death In Cryptoland A Death in Cryptoland Introduces: Nothing is Foreign A Death in Cryptoland Introduces: Nothin...
World news, local voices. Nothing is Foreign is a weekly trip to where the story is unfolding. Hosted by Tamara Khandaker. This episode takes you inside El Salvador to hear from locals to see how the promise of a cryptocurrency paradise by a self-professed 'world's coolest dictator' is running up against the reality of regular people just trying to survive. More episodes are available at: http://hyperurl.co/nothingisforeign

A Death In Cryptoland Episode 6: The End Game Episode 6: The End Game
The revelation that Gerry’s house of cards had been falling apart — just as he’s reported dead in India — leaves people wondering: is this an exit scheme? Could Gerry still be alive? From buying a death certificate to Haitian zombie powder, people talk about the conspiracy theories.

A Death In Cryptoland Episode 4: Voleur Episode 4: Voleur
Despite Michael Patryn’s denials that he’s a fraudster named Omar Dhanani, customers aren’t buying it. They’re demanding proof. A mugshot. A secret service agent, a felon-turned podcaster, and a childhood friend tell the story of Omar, the man Michael insists he’s not.

A Death In Cryptoland Episode 3: Cracks in the Empire Episode 3: Cracks in the Empire
Gerald Cotten and his business partner, Michael Patryn, launch QuadrigaCX on Boxing Day, 2013. There’s hype in the budding Bitcoin community and the small exchange seems to have a meteoric rise. But cracks begin to appear, problems with the banks, a software bug, and delays in paying back customers. Meanwhile, online rumours of a criminal past dog Michael Patryn.

A Death In Cryptoland Episode 2: Hunting Ghosts Episode 2: Hunting Ghosts
QuadrigaCX collapses and there’s widespread panic. An online sleuth searches for answers through a tangle of websites, hidden identities and a trail of emails. He uncovers a pattern of deception that predates his exchange, linking Gerry to a shadowy underworld of fraudsters.