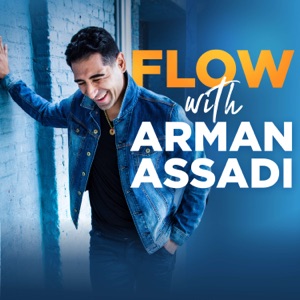 101. Why I’m ALL IN on Crypto | Introducing the Alfalfa Podcast and More - Transcripts

***
All podcast links here.
Follow me on Instagram and Twitter.
This podcast is 100% free and member-supported. If you enjoy the show please subscribe, it helps support the podcast. Also please leave a quick review on Apple Podcasts here and rate the podcast 5-stars on Spotify.

Welcome to flow with Armand Asadi, Welcome to 2022. Here we are. And um I want to take a moment to say, I appreciate you, I appreciate you for being here. We accomplished a Major, Major Milestone recently, episode 100. If you haven't listened episode 100 definitely check it out. But um it was a really special one and I went into some stuff that I didn't even know I was going to go into and um I'm really happy with ultimately how it came out and now here we are on episode number 101 in a new year. So the whole thing is very synchronized IQ and timely and it feels like a new beginning, A new chapter of the next 100 episodes. So where are we going from here? What's in store for you? What's in store for all of us and um what's been going on with me. So I thought I would use this as an opportunity to update you on a few very important things. Well, first of all, you know, I have sort of alluded to this both directly and indirectly multiple times around my obsession with the crypto space and um I've basically been all in for the last three months for sure, but you know, outside of the work that I was doing on whatever project it might have been all of my time Who's going towards crypto over the last year.

And um you know, personally, I've been in the space since 2013 when I say I've been in the space, I just mean sort of investing into Bitcoin ethereum. Um obviously it was just Bitcoin back in 2013. I've been dollar cost averaging my way in over the last almost 10 years and I'm very happy I did that and about a year ago, I would say at least two years ago I kind of started having these conversations with my Wednesday, a group of friends who you've come to know as the tipsy talk guys who are now the alfalfa guys. I'll get to that in a second. But you know, this obsession just left me feeling like I needed to, it was sink or swim. You know, the conversations I was having were so advanced and things were moving so rapidly in this industry that I just felt like if I didn't jump all in, I was going to get left behind and I've seen this before, although I was much younger when the web to craze happened when the dot com bubble really arrived. And that was an incredible opportunity for anybody at that time who was in a position to find capital and create the right type of companies um that created value for their users. And now with, you know, quote unquote web three, we're seeing something similar and all of that is sort of founded and rooted in Blockchain technology really. And it's because of the iterations of Blockchain that we are, where we are today, where we have these smart contracts and these N. F. T. S And all the derivative versions of what we'll see in the defi space and what we'll see um with just these coins as as an asset class.

Uh and as a hedge against inflation and more and more people and countries around the world are waking up to that and anyway before I get on a tangent I've been obsessed with this stuff and about four months ago just to kind of share the story. I uh you know I was kind of in a transition period and I got introduced actually I didn't even get introduced. He reached out the founder of a company called collective shift reached out and they're a crypto investing education platform and I was like this is really interesting. I was referred uh to him by Nathan chan the Ceo and founder of Founder magazine. And so this guy Ben reached out and we started talking about a potential consulting opportunity to help them uh ultimately grow and rebrand and sort of really pushed the name out there. Um And so I did that I engaged as a consultant and uh you know it was awesome and I started falling in love with what the company was doing and Ben and I started discussing a long term opportunity and um I was sort of in a position where because I was all in on crypto it was either start something or join something very early stage where I feel like a partner and someone who can see this thing, see the, see the whole thing through from 02 exit and uh in an executive role of some kind, whether it be marketing or growth oriented or operations oriented. And so the more we talked, the more synergy there was and these things aren't easy to negotiate because they're very important, big decisions. I mean, ultimately you're talking about almost something akin to like a partner, co founder level thing and or an executive thing at the very least. And these things are are, you know, they're they're full on. And so the good thing is I found incredible synergy with Ben and the team and uh long story short, we negotiated something and I've been uh I guess the the title not to the title really matters, but my focus is growth. My title is Chief growth Officer and I'm building this company, I'm building this company and I'm very excited for what we're creating. My goal is to really build the household name in the crypto education space where, you know, where you learn for free and where you learn through our memberships and the research that we provide to help people create wealth and freedom through crypto.

I mean, that's basically the tagline and the value proposition that I came up with is what do people ultimately want, they want to make money and they want to create wealth and they want to create wealth because they want to create freedom in their lives and this is an opportunity to do that with crypto as an asset class and I think it's possibly the one most important time in our lives and there may never be another one like this. And so I'm very, very excited about the work that I'm doing and in terms of focus and really being all in on the space, you know, obviously the thing that I've invested in when it comes to content has been this podcast flow with Armand Asadi and over the last year as well with the tipsy talk boys who've been on the flow podcast. There's been a lot of talk about like, well should we do our own podcast and after countless conversations, we finally got to a point where things started moving and if you're listening to this or watching this, you probably already know. But Alfalfa podcast is now live, it's going amazing, I'm super pumped about it, it's super fun and I have to be honest, it's like, it's very different this outlet this channel. This podcast is so good for me, being able to talk to you one on one is really a great and powerful outlet for me, but similarly, you know, having the Alfalfa boys on a podcast altogether, all four of us having a conversation is also really powerful for me and it's really fun and we're like six episodes in right now by the time you get this and it's going splendidly, Uh I got that word from a recent episode of curb your enthusiasm splendidly. Oh my God, if you have not watched season 11 of curb, I think it's the best season, possibly. The thing about curb is that every single season is so consistently good and it just seems to keep building and getting better. But I have to say the last two seasons in particular, 10 and 11, but 11, my God, in particular episode four, I believe it's called the Watermelon episode. I think it's number four, one of the best episodes of the show ever. Anyway, total total sidebar, but it's going splendidly and I couldn't be happier and I think there's something really powerful to having other people do the podcast with you. For me, it's really enjoyable because it's this, it's a conversation and it also gives me people to bounce ideas off of and grow this with and evolve this with and so I'm super pumped and we're gonna be doing some really big things. So in short, um, go check it out, make sure you subscribe to the show, the next episode that's coming out, you'll probably, it'll probably be out by the time you hear this is I think our best episode yet episode six, but all of them are amazing.

But I think episode six is our best one yet in terms of flow value to the listener and watcher and just the discussion and the topics overall, we were all sick with Covid or at least three out of the four of us. So I think it kind of brought a different energy. We're all low energy, but also really creative and open minded and anyway, there's a lot to gain from this show and the through line ultimately is, there were all these like radical moderates, our little, our little tagline for the show that we came up with is this, let me just read it to you. It's on our twitter for radically moderate internet and finance entrepreneurs serving purple pills and investing Alpha weekly. So purple pills is our whole little twist on, you know, the red pill blue pill thing and I think you'll find it very refreshing and unique and different. It's intelligent. It's slightly degenerate. It's raw, it's irreverent. Um, but ultimately it's also intellectual and there's a lot to learn and, and there's a lot of value and a lot of alpha. So head to Alfalfa podcast dot com. That's a l F A L F a podcast dot com excuse me, pod dot com. Alfalfa pod dot com.

Um, or just search Alfalfa in your favorite podcast player and Spotify and apple podcasts and it'll come right up, but you'll find all the links to everything you need on Alfalfa pod dot com and um yeah, make sure to subscribe, subscribe to the show on youtube as well. We're dropping the videos and tons of clips across all of our social media channels were hiring. We're growing this thing, we're taking it seriously and um, it's really just gonna be this other outlet for me in addition to flow. And if you're at all interested in in these topics like investing in crypto and politics, I think you'll really enjoy alfalfa as well. So it'll be a different side of me in a different side of my mind. And you kind of get to see behind the scenes a little bit into my uh, my personal life in terms of how I interact with three of my best friends. So thank you for tuning in. I appreciate you as always. Um, my virtual door is open. If you have any thoughts for me, send me a message feedback, anything like that, you know where to find me until next time. Much love peace.