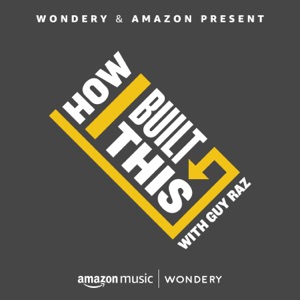 Millions of Americans don’t have enough to eat — a startling fact considering 40% of the food produced in the U.S. gets thrown away. And a lot of that food… from restaurants, supermarkets, office buildings and more… is perfectly safe to eat. What’s worse is that this discarded food waste produces harmful methane emissions that contribute to global climate change. Jasmine Crowe-Houston is an entrepreneur who became obsessed with these problems. In 2017, she founded Goodr, which works with businesses to take unused food and deliver it to those who need it. Instead of paying waste management companies to throw surplus food into landfills, businesses can work with Goodr to deliver that food to local nonprofits that get it to people in need. This week on How I Built This Lab, Jasmine talks with Guy about solving the logistical challenge of delivering surplus food to people experiencing food insecurity. Plus, the two discuss Jasmine’s decision to launch Goodr as a for-profit organization, and the growing corporate focus on sustainability that’s led to Goodr’s rapid growth. See Privacy Policy at https://art19.com/privacy and California Privacy Notice at https://art19.com/privacy#do-not-sell-my-info.

Hey prime members you can listen to how I built this early and ad free on Amazon music download the app today how I built this is pleased to have slack as our presenting sponsor slack where the future works what slack beer digital H. Q. it's one digital space that brings together all of your people and all of the tools you need having slack makes collaboration easier and more flexible so you can be a lot more productive don't wait to see what you can accomplish with your own digital H. Q. head over to slack dot com slash D. H. Q. to get started slack where the future works support for the show comes from cleo cleo is the email marketing platform that brings all of your customer data into one place with hundreds of E. commerce integrations Claudio helps you send relevant email and SMS messages to the right people at just the right time so you can build genuine customer relationships and grow revenue as brands face a more volatile economic climate and a challenging digital landscape Claudio's powerful marketing automations and customer first data are critical to retaining brand loyalists and increasing our ally it's time to talk to your customers like you know them because you do with Claudio learn more at clay B. O. dot com that's K. E.

L. A. V. I. Y. O. dot com hello and welcome to how I built this lab I'm guy rising thirty four million Americans don't have enough to eat and several million of them are children and it doesn't actually make sense when you think about it because there is more than enough food to provide for everyone every day in fact forty percent forty percent of all the food produced in the United States gets thrown away and a lot of that food is perfectly fine but every day millions of tons of food are thrown out by restaurants supermarkets warehouses catering companies hotels and corporations and many state and local laws make it really difficult to re distribute that food to people in need and to make matters worse all that food ends up rotting away in landfills and then produce massive amounts of methane emissions jasmine Crowe Houston is an entrepreneur who became obsessed with these very problems in twenty seventeen she founded a company called good which works with businesses to take unused food and deliver it to those who need help before jasmine launched she was running an agency that helps black celebrities set up charitable organizations on the side she set up pop up restaurants and parking lots to serve free food to homeless people in Atlanta where she lives that experience with his eventually leads jasmine to start you started an organization called black celebrity giving this is back I think it two thousand eleven around the time that you sure and BA tell me tell me about that what was the idea behind it

that's when people tend to care

just step back for a second ask you in general about the problem of hunger in the U. S. could you give it to talk about this and everyone listens to go see it it's so good but I was and I guess I shouldn't be amazed because I've been in this profession my profession for more than twenty five years but forty percent of the food consumed in the U. S. is thrown away every year that's what I read is that true

billion pounds of food is thrown away just thrown out

so if you can imagine a billion right that sounds like a lack in the U. P. eighty billion I mean this is a lot of food I mean

and just by being there rotting away it really submissions

more than you would believe fresher

under your present still till this day I probably get no less than three to four either emails tags on social media pose of people everyday people going to a grocery store scene this perfectly good food that gets thrown out I remember one time a lady in and it's it's funny because she she said she actually got in trouble for it but at a Walmart in Atlanta the power went out in I mean win out for less than twenty minutes right and because of that they were throwing away everything in their freezers and everything in their coolers and so she calls us and she was like Hey I don't know if you guys can get here but we're about to draw this food away so we get up there we bring like I think we have like a U. haul truck one of our vans in I was blue I mean that everything is in the freezer so all this food yes all of it just going away so I'm like oh my god why does this happen every single day what's funny guys if we go to if we go to Walmart we got a grocery store and we purchase groceries what if we stop someplace else chances are we don't even make it home in twenty to thirty minutes or

they were paying people to haul enough

yeah all right so you decide to run as a for profit N. and the idea was that that essentially companies restaurants grocery stores catering companies are already paying people to haul away their food waste and most of it what we call food waste is actually food that hasn't been eaten consume still packaged in many cases

one of the things that you decide to do is from the get go is that you're gonna be a technology company that actually because this is a logistics challenge you have to build a robust technology platform to deal with logistics like if anyone like nose in the U. P. S.

well I started hanging out around Georgia tech

and I guess the difference between you and the about waste management services that they were they're just gonna pick it up and dump it you guys are gonna pick it up given to nonprofits and then hand them a slip with their donation credit so they can actually exactly right not slick it's almost a rebate like they they might pay you X. the hundred dollars a month but they might get a twenty five dollar rebate from the donation a tax credit

we're gonna take another short break but in just a moment we'll have more from gooder CEO and founder jasmine Crowe Houston I'm helping businesses waste less food people stay with us I'm guy rise and listening to how I built this lab everybody has something they look forward to in the fall then if you're in health care they're something extra exciting on the horizon brand new fall colors and styles from Biggs if you haven't heard makes makes the company a scrubs around their engineered with innovative technical comfort technology to be ridiculously soft and incredibly durable so you're always ready to take on the day in style pick up a set in one of their new fall colors for a look that's one hundred percent awesome all season long fakes believes the awesome humans and health care deserve awesome scrubs to match had to wear **** dot com and use code one Jerry to get fifteen percent off your first order that's W. E. a R. F. fight CS dot com promo code one three the best what's it called welcome back to hardball the slab I'm guy rise and my guest is jasmine Crowe Houston founder and CEO of Qatar you really created a logistics company a technology company in addition to being a service provider right because you have clients I mean they're people who need you know they're nonprofit so your sense your clients they need this food I mean I just try to get my head around all the challenges you have to face I mean you had to build a network of trucks and vans presumably to pick this food up in addition to building the tech stack tell me a little bit about I don't know about that about the transportation side of this

we really focus on being like part of the community

I've got some really big partnerships you'll see a lot of that like the expansion with our current customers I'm C. dax magic we have a great partnership in place with magic Johnson's and joint venture with said excel is a rolling out across all their locations I think it's really about expansion now which is really why we raise some money to hire more team and to be able to grow our footprint

jasmine thank you so much

thank you I really appreciate it

this episode was produced by Catherine Seifert with editing John

the world's greatest sporting event only rolls around every four years and every four years everyone becomes a soccer fan that's right billions of eyes are about to fall upon thirty two nations battling it out for soccer supremacy and the men in Blazers podcast will once again be your guide to every incredible goal every heartbreaking defeat and every moment of human triumph this is America's number one soccer podcast bringing you expert analysis of every U. S. men's national team game and exclusive interviews from a slew of athletes and celebrity guests all month long this is what the world will be talking about follow men in Blazers wherever you get your podcasts you can listen ad free on Amazon music or wondering app