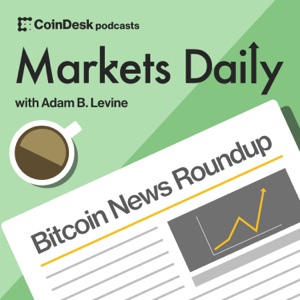 On today’s show, CoinDesk reporter Cheyenne Ligon, recaps the magic of Consensus 2022 and what you may have missed as we say goodbye to Crypto’s latest bull market. This episode is sponsored by Kava and BCB Group. Read the full story here. Resources: Coinbase Offered Them Dream Jobs—and Then Took Them Away | WIRED Doc Blust Opening Set for Disclosure at Stubbs - Consensus 2022 Doc Blust - Markets Daily Theme (Club Mix) Barton Springs Pool | AustinTexas.gov  This episode was edited & produced by Adrian Blust with original music by Doc Blust & Colin Mealey - Kava lets you mint stablecoins, lend, borrow, earn and swap safely across the world’s biggest crypto assets. Connect to the world's largest cryptocurrencies, ecosystems and financial applications on DeFi’s most trusted, scalable and secure earning platform with kava.io. - BCB Group is the leading business banking partner for the digital assets industry. We provide the rails to move money and a gateway for crypto to FX markets at scale. Our mission is to connect and bank the global crypto industry. Find out more by visiting bcbgroup.com/coindesk. See Privacy Policy at https://art19.com/privacy and California Privacy Notice at https://art19.com/privacy#do-not-sell-my-info.

This episode of Markets Daily is sponsored by cava and BCB group.

saturday june 18th 2022 this is Markets daily from coindesk a major and blessed here again with your weekend story on today's show coindesk reporter Cheyenne, Ligon recaps the magic of consensus 22. As we say goodbye to Kryptos latest bull market and just a reminder, coindesk is a new source and does not provide investment advice. Mhm. Today's story is titled consensus 2022 was the crypto bull markets. Goodbye party. The first flurries of the crypto Winterfell before consensus 2022. Just a few weeks before 20,000 people descended on Austin texas for coin desks annual festival the terror U. S. D. Or U. S. T.

Stable coin collapsed, wiping over $80 billion from the total crypto market cap and triggering a wave of sell offs, coin base slammed the brakes on hiring and announced it would be receding. Already accepted job offers. Despite earlier promises that we have linked in the show notes that the NASDAQ listed exchange would do no such thing despite the growing chill in the markets or perhaps because of them, consensus was an absolute banger for four days. Conference goers ate drank and were married, they traverse the city on scooters in the texas, heat bouncing between networking sessions and hackathons and various hotels. Two sessions in the Austin convention center or the A. C. C. Featuring some of the biggest names in crypto and culture including whistleblower. Edward Snowden ft ex Ceo Sandbank man freed and rapper two Chainz attendees eagerly collected desk coindesk social token and use it to pay for tacos and barbecue from food trucks or consensus branded merchandise. At night they swap desk for drink tokens at the consensus affiliated after parties like the one headlined by the electronic music duo disclosure which I have the absolute honor of opening for. In fact, you can find a link in the show notes to listen back to my opening DJ set as well as a link to the club mix of the markets Daily theme song I co produced for the show, consensus adjacent events including the helium house 80 X sponsored by the rapidly expanding helium protocol also thrived catered dinners and after parties sponsored by the companies such as finance drew large crowds and industry insiders rubbed elbows with the regulators and investors at invite only events like lobbying group, coin center's annual dinner in hindsight, coin center's dinner seems more akin to a last supper and its theme inspired by the, this is fine meme in which a dog in a tiny hat, sips coffee in a burning room feels prescient. On sunday morning, consensus 22 wrapped up with a well attended interview between coindesk.

Emily parker and finance ceo chang chang sau or C. Z. Zee House proclamations of having a healthy war chest to whether the coming crypto winter were met with cheers from the audience. Later that evening, crypto lending service Celsius halted its withdrawals and other products, sending the markets into a panic on monday. The price of Bitcoin plummeted going as low as $20,834 in the early hours of Tuesday morning. Later on Tuesday coin based announced mass layoffs slashing nearly 20% of its workforce and leaving approximately 1100 people without jobs. As the flurries of crypto winter turned into a blizzard consensus offered attendees a brief shelter from the storm, a warm heart to gather around and meet friends, tell stories and plan for the future and not to mention simply a fun place to finally meet your colleagues in person. The wag me or we're all going to make it. Optimism of the bull market is fading fast but hey at least we have fun in Austin. It's true

cava gives you the ability to earn more by connecting the world's largest cryptocurrencies, ecosystems and financial applications on defies most trusted scalable and secure earning platform. Kava is an institutional grade cross chain engine built to scale on the largest decentralized proof of stake network with lone A. P. Y. S. As low as 0% and reward a py is as high as 200% cava is the safest place for you to grow your digital portfolio. Mint stable coins, lend borrow, earn and swap safely across the world's biggest crypto assets with Kava to learn more, visit Kava dot iO slash markets Daily BCB group is the leading global provider of business accounts and trading services for the digital asset economy with a dedicated focus on institutional payment services. BCB Group provides business banking, Cryptocurrency and foreign exchange market liquidity for crypto engaged financial institutions. BCB business accounts offer multi currency transaction banking solutions with blink instant settlements network. You can move money instantly. 24 7 with no transaction fees, visit BCB group dot com slash coindesk. To find out more about how BCB is empowering the global financial revolution.

Coindesk social token made its debut as a full fledged Blockchain token at this year's consensus. The beta version used in last year's virtual consensus which could be obtained by visiting various sessions and exchange for coindesk. Merch and non fungible tokens or N. F. T. S. Was enormously popular and developed a fan base that named themselves the piranhas for their insatiable hunger for desk to appease the piranhas. In Austin coindesk made desk bigger than ever, bringing it from the experimental environment of ethereum test net to polygon and live Blockchain and offering in person events to teach attendees how to redeem and use their desk. We have a video of how to use desk linked in the show notes as well. If you want to check that out desk could be obtained by scanning QR codes posted around the conference or completing quests given in the desk. Discord server such as taking selfies in various places or shooting hoops at the sport court Over 20% of consensus attendees used desk during the festival, collectively spending approximately 200,000 tokens on food, drinks and merch, dozens of helpful volunteers and bright yellow desk t shirts swarmed the convention center offering help to confuse attendees. It wasn't all sunshine and rainbows though and it really wouldn't be crypto if there weren't some scams.

Some would be desk peronnas got greedy, tearing down QR code stickers from signs in an attempt to redeem more than their share and prevent others from getting desk scammers printed fake desk multiplier QR codes and stuck them on desk posters, hoping to scam desk users out of the contents of their wallets turns out that even if it's just desk, the old crypto adage of do your own research still applies. Consensus has always been an occasion for gimmicky spectacle. The 2018 event, which attracted roughly 8000 attendees, famously featured several Lamborghinis that were parked outside of the conference in Austin. However, the lamb bows were absent, replaced with even more expensive Mclarens, one wrapped in a pattern of hundreds of overlapping dogs, shiba. Inu faces attracted a large crowd when its owner, the crypto influencer Julia love parked it in front of the Hilton. The demo of crypto the musical on june 10th was also spectacle. The brainchild, Amanda Cassatt Ceo of the crypto marketing firm serotonin. The would be broadway show aims to tell a story of one woman's journey fleeing the corporate world to join a crypto startup end, quote the aspiring theatrical projects creative team who also produced the Tiktok musical and performers serenaded the audience with two songs from the show, including one about how we test a framework created by the US Supreme Court to determine whether transactions qualify as securities consensus 2022 also featured the first meta gala, a black tie event where crypto investors, influencers and artists came together to drink dance and raised money for several charities, cocktails had theme names such as memory to the meta mule and the meta spritz Though this year's consensus was held in Austin after years in New York or virtually because of COVID-19. The Texas capital turned out to be the perfect fit for the festival. The spirit of Austin meshed well with crypto and consensus attendees embraced the entertainment and culture the city had to offer when they weren't buying food with desk attendees. Eight, a famous local restaurants including the texas chili parlor and franklin's barbecue, they went to drag queen brunch is on Fourth street and they cooled off at Barton Springs, a spring fed pool and Zilker Park beloved by locals forced notoriously cold water, which we also linked in the show notes, definitely worth checking out next year. If you haven't already.

On the final day of the conference, Austin, Mayor Steve Adler joined coindesk chief content officer, Michael Casey to announce that consensus will return to his city next year. Although to beat the 100 degree heat, it will be moved from june to late april though Austin was sweltering consensus goers may miss the texas heat after returning home to headlines about layoffs, price slumps and once high flying lenders, potential insolvency, consensus was a respite from the cold and hopefully for many a fortification now it's over. Crypto, Winter is here. Let's bundle up

and that's our show for today. Thank you very much for listening. This episode was edited by Adrian blushed and we'll be back tomorrow with your weekend story and just a reminder that Coindesk is a new source and does not provide investment advice.