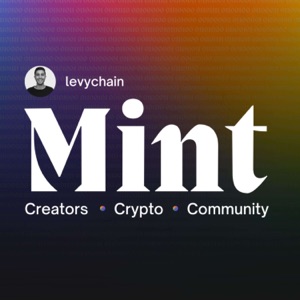 Enjoy the best moments from the podcast in bite-size segments.

This short is brought to you by Lens Protocol.

Yeah, exactly, yeah, like tokenizing an episode and collecting that episode, whether it be a one of one, in addition count, but giving the end user, if they enjoy it,

they enjoy consuming it, the ability to collect it. Yeah, I mean, when you and I chatted about that, it was pretty eye-opening, because I hadn't considered that before, as far as like, you know, I guess I don't know exactly what the old world equivalent would be like, you know, movie poster prints or something like that around the thing, but there's clearly value in that stuff, right? And if someone's willing to pay for it, extracting that value seems like a normal and good thing to do if you're trying to monetize, right? I think, you know, we have leaned maybe a little bit outside of that in terms of using NFTs as a ticket into a cooperative. Doesn't mean that we can't also do what some other podcasts and crypto shows are doing around putting out digital collectibles around that content. I think that's kind of similar to kind of what we were trying to do with the Metaverse episode in terms of building something that is co-owned, right? You can experiment with it, you can digitally interact with it when you're in Decentral Land. So that's kind of a cool experience, but you also call them things with us. So that's certainly one way I guess, in terms of content that it's talked about in that episode about the Metaverse. That's kind of cool in breaking that wall down. But yeah, I think there's a lot to be considered around digital collectibles and the content itself. I guess it's no different than songs at that point, if you really wanted to create like kind of a royalty built around that.

And it's early for me to kind of explore what we might do. I'm excited about it because it's just another experiment that's worth experimenting with and trying and testing and seeing what would happen. I do believe there's value in the stuff that we create in the content that we create. And I think over time as audiences scale, you find your true believers and your consistent viewers and watchers that enjoy that content. And they get paired up with a bunch of others across other media networks that may also enjoy that content at a similar level and the ability to collect it and prove your ownership and prove your participation in that creator's career, in the network's growth, whatever it may be, it is, whatever it means to the end user, right? Having the ability to create markets, digital markets around content that you otherwise would just double click and heart and save to your favorites folder, right? Yeah. It's very analogous to doing that, right? Like when you're scrolling through TikTok and you click like and you favorite something and then you could go to your favorites folder and view all the content that you liked, it's very analogous to collecting something and it landing in your wallet, right? Like it's a very similar process except one could have more value and unlock more value than the other. The TikTok model is gated by TikTok. That value, we get extracted, that entire value gets extracted from us.

We become products of the platform and the marketplace is the ad network that TikTok gets to monetize on top of our attention, right? Whereas if we, for example, were to tokenize more of our content, and by the way, it's not perfect yet. I need to practice more about what I preach, but having this discussion is opening up my eye more to this concept, but having the ability to collect something, even if it's for free, right? Forget the model, let the audience, let the network, let the community decide what it's worth. If it's worth nothing, it's worth nothing. I think there's a level also of data that you can unlock by understanding the granularity of who collected what, what other things are collecting and how you can create experiences around that. That's something that you cannot do,

that you can't do that in Web2. Yeah, after we chatted, I crunched the numbers and was looking at what we might be able to do if we dropped some of those things around our season one content as well. So I'm not ruling that one out at all, especially, when we looked at the data that you were actually able to pull from Bello and looked at some of that stuff around like, okay, who are in our collective set. When we think about who owns what and our free NFT there, what do we learn from that? And so yeah, I think there is a lot of value to extract. Once you do things like that, it just creates, I guess, again, this goes back to like something that would never be greenlit in like a traditional media company because they'd be like, well, what's the ROI for us? And it wouldn't make any sense to them. In the old model, it wouldn't make any sense. Which is why like having the greenlight to experiment in this space, I think will be extremely interesting for anyone who wants to weigh in on what coinage does because that's, it clicked for me. I don't know if you were in constitution now at all, but like I just saw what's possible when like a group of people all around the world throw their like support and energy behind something. And in that case, it's very simple. It's just by the constitution.

And then it's like, let's create a DAO with a megaphone to cover crypto news in a different way. Like, will that appeal to everybody? No, will it appeal to some people who have enjoyed our content thus far? Like, yeah. And so like, let's see what we could do as a DAO with a megaphone to kind of change the game. And I do think it is extremely exciting to kind of, again, as a creator, build something, see who it attracts, and then build on that creative energy to do something together.

And that to me is like the whole story of what I just saw. And it's like, yeah. What's up, guys? Thank you for listening. If you've gotten this far, then you are a champ, and I owe you a free listener pin. Go to adamlebby.io forward slash NFT, fill in your info, and I'll distribute the NFT towards the end of the season. By collecting your pin, you prove your contribution to the season and get exclusive access to content, allow lists, and more. So be sure to collect yours. Also, please make sure to rate and subscribe to the podcast wherever you're listening. This helps me out so much. And finally, hit me up on Twitter, at levychain. I want to hear what you're building, the latest crowd fun you're trying to complete, or if you simply want to chat.

I love talking about where crypto meets the creator economy, and it's no different if it's coming from you directly. So thanks again for your support. It means the world, and I'll see you on the next episode.