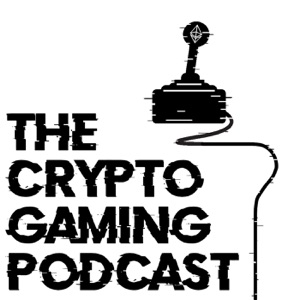 Welcome to the Crypto gamer podcast presented by Iskra. The premier destination for web three gaming. I'm your slightly knowledgeable host made. I am not a financial advisor, just a gamer speculating and this episode we're going to be talking about meta source games and their castles, N. F. T. Game which is really one of the top idol mining games out there in the Blockchain space. Now I had the team on a while back to talk about their game and they actually had a new free to play mode coming out called the Royal Banquet which is coming out on the 17th. So actually yesterday, so perfect time to get in. This team is constantly adding new games and mechanics to their ecosystem and they have a really great following. Plus with this new new release, the team is actually giving us some N. F.

T. S to hand out to jumpstart your characters in this new mode. So super exciting about that members of our discord are gonna have some of the first chance at some of these and then we'll have a giveaway on twitter as well and before we dive into that the royal banquet, some of the ways you can play this game, a word from our podcast partner Iskra now, Israel believes the future of gaming is on the Blockchain and they offer the premier destination for players and developers to explore the thrill and opportunity of web three gaming alongside a vibrant community. So right now actually you can explore a platform using Blockchain built for next gen, web three games and the community system that rewards both players and developers based on their participation, you can sign up now at Pioneer dot dot world and join their discord group to start exploring the future of gaming links are in the show notes as well. Plus if you join their discord using our link, you'll be in line for some special rewards. Alright, back to castles and their newest game mode. So like I said earlier, the new play mode is called the royal banquet, completely free to play. And as it says on their website, banquets are a busy time for a knight Squire. So you're gonna start off as a knight Squire, everyone can get one for free, you just have to pay the minting costs and you can open up some banquet packs to start earning power ups for your character and increase your Squires earnings. So this first season of the royal banquet is going to last for two, two months and you will be allowed to claim your m source tokens which is used throughout their entire ecosystem, the whole castle's metaverse, and then you will also earn banquet coins and then on top of that also permanent rewards that will cycle into new seasons. So here's how it works, here's the rundown, every account gets a free account bound character which is the Squire, so no matter what no, no, you put money in, you just have to mint it, which costs almost nothing since it's on the wax Blockchain. Now, once you have your Squire every eight hours you can claim m source their token and their new token that they've released called banquet coin.

These rewards come from a limited daily pool that is shared across all players participating in the exact numbers are actually going to be announced a little bit later. So on top of being able to claim m source and their new banquet coin every eight hours, you can also open new banquet packs full of power ups such as tea, bread cake and wine so that you can level up your character and power ups have five rarity levels from abundant to epic. You can consume these power ups to increase your character's ability and compete for earnings. Now your Squire is going to be earning this banquet coin like I said, and you can actually use that coin, which you're earning to open up even more banquet packs without even having to wait the eight hours while you're playing. You're going to be competing on leaderboards and your power will determine your raffle tickets for the season based prizes and prizes will include castle land packs, dungeon heroes and more so tons of stuff from around their entire ecosystem. The land packs are super cool, I have a bunch of them and they're constantly earning me and source great idol mechanics there. Like I said, seasons last for two months and season rewards will include badges and perk ingredients based on your placement in the power rankings, you can use em source and banquet coins to craft your season badges and perks and most of these permanent rewards will be tradable between other players, which is really nice at the end of the season, your characters will actually reset back to zero, so completely starting new, but your badges and perks and multipliers will remain. So the stuff that you've earned through season rewards will continue on. So a great way to sort of bring people who get in early into this new season. Second season, whenever that starts now on top of all this, the Squire and using the power ups to increase their ability factions are also a major part of this mode. When you enter the banquet mode, your user wallet will be assigned one of three different factions and your character can actually only consume power ups from your matching faction. So when you open up packs, they won't necessarily match the faction that you are, which sounds terrible, but actually you can trade them with other people, other factions and you can even put them up on the marketplace.

So like I said, this whole game sort of revolves around power ups and there are five different versions and the values of these, they vary quite a bit so abundant, which is the lowest is a value of one common as five uncommon, 10 rare as 15 epic 25. So we're 25 as much as an abundant pack. So really interesting five different rarities. So hopefully when you're unpacking you get some of those rare and epics. So after this two months season rewards happen and some of the rewards are these castle land packs which will also earn you there m source token which then can be transformed into the wax token. You'll also earn permanent season to season rewards. Things that will boost our earnings in the following season, Season 23 and beyond and your eligibility for these perch will depend on your power level. So if you've been playing for fairly regularly, you should have a good chance of qualifying for the season and rewards. Now there are some season to season restrictions, banquet tokens and power up N. F. T. S will only be valid based on this season.

So with the exception of permanent season rewards, um you will not be able to carry over stuff from season one to season two. Same goes for power up. So if you minted some and didn't use them, you can't use them in season two. However, you can use unspent Bakwin tokens even though they don't transfer over, you can use them to craft into permanent rewards and upgrading your vanity items. Now, like I said at the beginning of the episode, you do have to pay minting costs um since it's on wax, that's not a whole lot of money, which is great. The main game is free to play, but there is an intrinsic cost to minting N. F. T. S on the Blockchain even on wax pretty much everywhere. So users will have to pay this basement cost and at the time of me putting this out there that's 0.1 wax per N. F. T.

Which is very very little. That's like one penny. And if you're opening up like five every single eight hours that ends up being about 80.5 point six wax. So if you were able to claim packs every eight hours which most people probably will not able to do it every eight hours because we have to sleep and sometimes we forget that ends up being like a dollar 40 in wax a whole week. And so the rewards more than cover that. So it's really as near to free to play as possible. You do get all of this stuff, you just have to pay for the gas fees which is so little, that's why waxes awesome wax ecosystem in general is doing a ton of really cool stuff. So as far as my final verdict for this game um as far as idle mining games go, no one does it better really than castles. N. F. T. Maybe Goofy's comes close.

They do a great job also there on polygon castles keeps adding to their ecosystem. They have a ton of different things going on constantly updating and doing a great job of being transparent with what they're doing this free to play game mode with Seasons and Contest is really a great addition to their metaverse. Like I said, they're giving us some N. F. T. S to jump start you on your journey. They're giving us these epic cake N. F. T. S, which are the pinnacle of the royal banquet. Power up N. F.

T. S. So a great way to get started and you can grab one of these by by joining our discord or retweeting our giveaway which we're going to be posting up. Players are going to need to link their wax wallet, join the metaphors Discord and tell them which faction you are so that you can get the correct power up N. F. T. S. You can find links to all their socials in the show notes and keep up with their latest news and updates and connect with the community. All right, that's all for today. Thanks for listening. And if you enjoyed what you heard, please subscribe. Follow me on twitter or instagram for when future episodes come out and if you want to support the podcast, feel free to join our discord.

Will you get access to exclusive N. F. T. S. Chat with me about upcoming projects and find out what I'm investing in details are in the show notes. Thanks again and happy N. F. T. Hunting