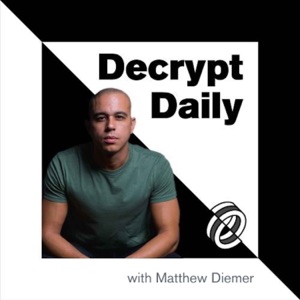 Coin of the Day

Financial Disclosure: Matthew Aaron is a holder of cryptocurrencies, digital assets, and other stocks.

*** this is not financial or legal advice***

from the media. This is the decrypt daily. My name is Matthew Diemer today on the show. Voyager has exposure. Oops we have more NPR criticism. This one from a professional and crypto

today on the crypt daily.

So have you ever searched for something online that you just don't want people to know that you're searching for first? Get your mind out the gutter. Everything

but maybe somebody's birthday present. Maybe you're just searching for something online that you just were intellectually curious about. A topic that might be taboo conspiracy theories,

knows? Well you know what these days the excuse intellectual curiosity doesn't go too far. If people are asking why are you searching for that? And that is why you need a VPN. I know. Wait, I know you're probably thinking why don't you just use incognito mode? Let me tell you something. Incognito mode doesn't hydro activity. It doesn't matter what mode you use or how many times you clear your browser history, your internet service provider can see every single website you visited. That's why even when I'm at home I never go online without using Express VPN. It doesn't matter who your internet service provider is. Your I.

S. P. In the United States can legally sell your information to add companies Express VPN is an app that reroute your internet connection through their secure servers. So your I. S. P. Can't see the sites you visit. Express VPN also keeps all your information secure by encrypting 100% of your data with the most powerful

most of the time. I don't even realize I have expressed VPN on. It runs seamlessly in the background and it's so easy to use. All you have to do is tap one button and boom you're protected. Express VPN is available on all your devices. I have it on my phone, my computer, even my apple tv. So there's no excuse for not using it Protect your online activity today with the VPN rated number one by business. Insider visit my exclusive link at Express VPN dot com slash decrypt. And you'll get three extra months for free on a one year package. That is E. X. P.

does coin Total market cap is up one

something I'm surprised we haven't covered yet. Al gore and

69% is in circulation. So what is the all time

high for this algo? Well it was three years ago at

base coin gate dot io hobby finance that us

bit thumb bit for next cracking. It's a top 30 coin. So you know you're gonna get it everywhere. Now the question is what does this

thing this coin this whatever this is. Dude what

is this? What is this?

Well algorithm is a self sustaining, decentralized

Blockchain based network that supports

a wide range of applications.

are secure, scalable and efficient. These are all critical properties for effective applications in the real world.

Al gore and will support computations that

trust the algorithm. Main net became live on June of 2019 and was

Able to handle almost one million transactions per day

and that's al gore and

headlines. But first I'm gonna start with listener email because it

talks about an article we've been talking about all week. Jason writes in and says, hey Matthew, first of all, thanks for your podcast. I listen more or less every

day while I'm on my way to or from the gym or yoga. I'd like to say that always brightens my day, but I've invested

heavily in terror and Celsius. So I'll say

information. So who am I?

I want to introduce

I'm a solutions architect for the juniper

I to with great

punctuation and grammar by the way, thank you very much for your

commerce. I too am frustrated by the NPR article

that you mentioned yesterday in reference today in the listener questions, comments section. However, I have a slightly deeper frustration in the article implies

have often played conversations around que os and

you. The first implication that playing with individual crypto transactions is somehow

best while possible without doing

so in some very broad format like blocking DNS responses for common RPC endpoints, thus completely

disconnecting typical users from black chains until they

work around it. Doing

so would be cost prohibitive and require some level of user

or browser participation in their own censorship example, generally

Except to secure their own infrastructure. # two, such censorship is easily defeated with a VPN

that's a very good and obvious

point. Damn it. Okay, I should have just made that connection

larger concern should be the amount of decentralized applications

running on the small set of public clouds which

all have more Blockchain expertise on their bench than I S

by the way, Jason, he put

out a call, he said my expertise in perspective

as outlined above. I have extensive

experience in building, designing and operating service provider networks. I am engaged in some fashion with the most significant service

the United States so if anybody would like Jason services email me, I will send you his information or Jason,

that's okay, I will send that information.

Um and by the way, if you want Jason to go deeper let me know. Matthew Aaron decrypt a ceo but

Dun dun dun, dun dun dun. That's like a dooming music sort of thing. Let me see if I can't find a clip to insert there. If not you just have my stupid voice. Anyway.

$661 million dollars in exposure to

Our Buddies three Arrows Capital. They announced today that it may issue

a notice of default to the

Its exposure to the three

The new york based firm claims it made an initial request for repayment of $25 million in U. S. D. C. By june 24th or 20

And a subsequent request of a repayment

So Let me get this straight they went $25 million dollars tomorrow. And then the remaining

I don't know anything about the terms of repayment or how this business really works but that seems like a lot of money in four days. Neither of these amounts have been

repaid and failure by €3 capital to repay Either requested amounts

by the specified dates will

constitute in the event of a default. Last week voyages occurred a revolving line of credit

including cash usd based

An aggregated principle of $200 million dollars

And a revolving credit line of 15,000 Bitcoin. So here's the thing

doing, fractional reserve banking and giving out loans and people are not using these loans to buy houses or assets they're going back into the crypto market. It's just

that's what they're doing. I mean okay don't quote me on that

but I'm saying they're staking Bitcoin to buy Bitcoin to stake Bitcoin to buy Bitcoin or cults or whatever and they're paying back their loans. Their it's it's all about you know working the market. I mean that's what I think. I mean what else they use doing with these kind of terms of the loan and the uh it's not like a 30 year mortgage. It's like six months loans or three my phones

I got my money

out was getting it out of

credit from Alameda research or F. T. X. Or some

Um Was it stupid? No it was the right decision. And we have to understand because a lot of people don't really put risk. Everybody talks about risk. Are you high risk? Are you

risk on a risk adverse?

And so if you're

doing something putting your money in black fi in

Celsius in Voyager in itself

is inherently risky. It is high risk. It's

not the bank, it's not bonds,

it's not stock, it's defi

it's these companies that are unregulated that came out of

That is inherently risky and anybody who does that

should know you're taking a major risk with your money. However,

then your risk turns into not just high

is it really worth it?

According to analysis, legitimate use of

just .15% of all transactions last year was

involved in criminal usage. However, between 2019 and 2020 there was a queen suckling of the total value

And that level is

Well because of this analysis has now launched a crypto

that have opted for coverage from the

seven hotline. And if you are wondering is crypto going

You tell me if it's going to mainstream

when there's a hotline

right? Coin based announced today that it has plans to discontinue its advanced

service by the end of the year will be replaced by Advanced trade, a service that offers

comparable features but will live inside

the main coin based app in sight.

company however, has committed to honoring queen

based pros fee structure in the new advanced trade section

already live for desktop users and Queen based plans to roll

out the mobile version in the coming weeks,

because finances had this the whole time. I

mean even back in the day when they first launched, it

was, it was, I don't know what they call it. I think it's just

or basic and then advanced basically advanced in the business that you have to have more of like a which I made a mistake of doing it. I didn't know that there was two different fee structures pissed me off because

based pro, it was like is this actually coin base which was always totally weird. We had transfer funds between

coin base and Queen Bass Pro. I

mean the transfer is free and you got two different prices

from the same company

but it was just such a fast

to do the whole moving money in and out and

then you can connect

Your bank to one

or the other or both. I'm actually really happy that they're doing this just as long as they keep the same fee structure. Coinbase pro is

always weird and it was always

am I on the right site? Is this really coin base?

But anyway, I think it's gonna be a good

move just as long as they keep that fee structure moving into N. F. T. News. N. F. T. News is definitely not my favorite sometimes when there's businesses or artists or people doing cool stuff.

include artwork, stories of his life and career and access to events in discord communities which I'll tell you about it. I guess here's another one. Shopify adds an empty gated option for online retailers. Okay

today. Tether the world's largest stable coin issuers said it would introduce a token peg to the british pound next

month. The stable coin G. B.

According to a company statement on Wednesday an

issue will be supported

by the ethereum Blockchain. Mhm The Fed is closely watching the crypto world but it isn't worried According

from Bitcoin in the wider crypto market during its volatile price swings.

So that's great. Can we

please. And finally been since dot us is no longer charging fees for buying or selling Bitcoin

with US dollars that includes eliminating fees for Bitcoin trades

for the top three stable coins. U. S.

So just to say

it again if you buy

Bitcoin with us dollars or US dollar backed

thank you for listening to this episode of The Daily. My name is Matthew Diemer. Don't forget to go to Apple podcast like subscribe share. Leave us a

comment. You can send me an email, Matthew Internet to crypto Ceo and I'll see you tomorrow until then.