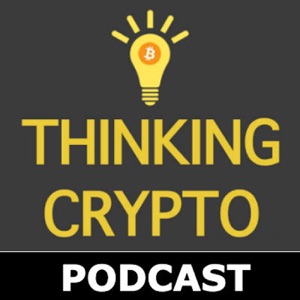 Founder and majority owner of Cryptocurrency Exchange Bitzlato charged with processing over $700 Million of Illicit Funds. Bitcoin pulls back on the news. 🌟Sponsor - Signup with Uphold. https://uphold.sjv.io/gbED4X 🚀 Get the Ledger Nano X to Safely...

Welcome back to the Thinking Crypto Podcast, your home for cryptocurrency news and interviews. If you are new here, please hit that subscribe button as well as the thumbs up button and leave a comment below. If you're listening on a podcast platform such as Apple, Spotify, or Google, please leave a five-star rating and review. It supports the podcast and it doesn't cost you anything. We've got some breaking news here, my friends. The United States Department of Justice has taken action against the founder and majority owner of cryptocurrency exchange Bits Lotto for processing over $700 million of illicit funds. There's a lot to unpack here. First, they made a press push before the announcement. The announcement took place at noon Eastern today. They did a live stream from their website, but major news outlets had an idea of what was coming. So here, Reuters, their headline was us to announce international cryptocurrency action. And they went into some very vague details, right?

They didn't want to give away what was the action and who it was against, but it involved the FBI and all the other folks. So they really hyped this up. That's the first takeaway. There was a big hype. There was a big media push. Then they had their live stream on the department of justice.gov website. And they talked about Bit Lotto, which I have never heard of in my life. I don't know if you guys have heard about this exchange, but I haven't. And if we try to go to their website, it says this service has been seized and it's been shut down their website. Everything has been shut down. So I've never heard about this. This seems like a very small exchange and the United States taking action against them.

So let me give you the details here. The founder and majority owner of a cryptocurrency exchange, Bit Lotto, LTD, was arrested last night in Miami for his alleged operation of a money transmitting business that transported the transmitted illicit funds and that failed to meet US regulatory safeguards, including anti-money laundering requirements. Anatoly Legnakovimov, from saying that right, who's 40 years old, a Russian national who resides in Shenzhen, People's Republic of China, is scheduled to be arraigned this afternoon in the US district court of the Southern District of Florida. French authorities and US Department of Treasury's Financial Crimes Enforcement Network, or also known as Fincen, are taking concurrent enforcement actions. So a couple of things here, guys. I am happy that bad actors are being flagged and taken out, right? They are being arrested, their businesses shut down. We don't want scammers in the crypto industry and market. Now, what he was doing here, it's not really exclusive to crypto. These type of things happen, of course, in other markets. Sure, one could argue that, hey, you can hide a bit more with cryptocurrency. Yeah, that's definitely plausible.

I can see that, especially if you're using privacy coins and so forth. But it's not the underlying technology that's the issue. It's not the cryptos or the blockchains. It's the bad actors. And this is why you need to weed them out. Now, I tweeted out that all this hype and so forth seems to be a push to help change the narrative that these US regulators and these folks have failed, which they did with Sam Bankman Fried and FTX. He was committing massive fraud way more than this guy it was. Sam Bankman Fried lost billions of dollars committing big time fraud. And it was happening right under the noses of the US and the regulators, not to mention Celsius, Voyager, three hours capital on Terra Luna and so forth. So I think this was a, okay, we need to change the narrative. We need to bring it back that we're actually doing our jobs and we're investigating and weeding out the bad actors. So I think that's another layer.

However, as the news cycle was breaking this morning, that the US was going to take a major enforcement action that spooked the markets a bit, right? I personally was thinking, Hey, is this something against stable coins? Is there something against tether? Some people are saying it's Binance, right? Because they were talking about international cryptocurrency action. So no one knew and you only guessed tether, Binance and so forth. But thank goodness, it was not, it was not any type of big player in the market. It wasn't some black swan event, you know, that could have driven the prices and send the market tumbling, but the market did get spook a bit and we see Bitcoin started pulling back. However, it's so funny how the news and the charts many times align perfectly because Bitcoin was overdue for a pullback, not a dump, but a pullback, right? You look at the Bitcoin four hour chart here, you see some red, but in comparison to the pump, it's nothing. It's just like pulling back and we could build support levels and keep running up. Now.

And you look at the RSI, right? It is pulling back as well here. So, you know, we have to let this still play out. What is Bitcoin going to do? Is it going to build support levels and keep working its way up or is it going to roll over and go to lows again? And of course the bears want it to roll over and go to the lows again, but I don't know. I think we still have to wait and see what it decides to do. So with the markets, you know, we're moving a bit volatile as a result of this news. So we'll see what Bitcoin does from here, from a macro, it still looks like it's, you know, a net retracement mode. But once again, it has to prove itself. Here's what one analyst had to say. His name is Caleb Frenzen.

He said, the pullback is an important but necessary opportunity for Bitcoin to prove whether or not we can produce a sustained rally breaking above the 200 day moving average cloud was step number one, flipping it into support is step number two. The 200 week EMA is at $21,000. The 200 week SMA is at 19,500, which is a big test. So holding pattern, we have to wait and see, let's see what Bitcoin decides to do. And we'll go from there. So, you know, this kind of news about bits lots, it was kind of a nut burger, nothing burger, if you want to call it that. We'll just have to wait and see some folks are saying this was an engineered sell off. Some are saying, yep, seems thrown together. And of course, people kind of, you know, making fun of bit bits lato. And, you know, we'll see, we'll see what happens, guys. But nevertheless, I think this is not bad news for the market, because you're weeding out a bad actor. It flips the narrative back that the regulators are doing their job and the U.S.

is paying attention to this. And it's important that, you know, these folks get weeded out and they're separated from the good players in the market, right? So nothing too crazy here, thank goodness, thank goodness it wasn't anything of the tether Binance level, because, man, that would have been painful, because can you can you imagine the what would have happened if it was something against tether? Oh, my gosh, it would have been a big time plunge, huge black swan, Bitcoin could probably have a $5,000 red candle today, right? If something like that was to happen. But thank goodness, it wasn't. Anyway, guys, what do you think about this news? Leave your thoughts and comments below, hit the thumbs up button, share this podcast and I'll talk to you all later.